​What is oxidation and what are free radicals? 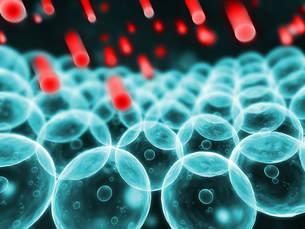 Oxidation is something that occurs in the body naturally due to the way our body reacts to the oxygen we breathe. Oxidation is the process of removing electrons from an atom or molecule; oxygen acts as an oxidising agent which can lead to highly reactive molecules being produced within our cells. These highly reactive molecules are known as free radicals which are naturally produced in our body from biochemical reactions, but there can also be external sources of free radicals which are difficult to avoid in our modern world.

We need oxygen to live, but a high concentration of it is toxic for our system, oxygen reacts with digested food so that we can obtain energy. This is a normal controlled metabolic process but it creates free radicals, free radicals are unstable atoms or molecules which have a single unpaired electron in an outer shell. These unpaired electrons are chemically highly reactive and can damage cells in human tissue.

Antioxidants are a necessary body requirement in human biochemistry but when these chemical compounds are lacking it can lead to oxidative stress. Oxidative stress is an imbalance or disrupted process in the body where it is unable to stabilise and neutralise free radicals resulting in cell impairment or damage. Oxidative stress can result in free radicals damaging the components of a cell, this damage can eventually lead to the death of a cell.

Below is a list of some of the mental and physical health conditions which may be linked to oxidative stress:
​​
Oxidative stress and toxic metals

Toxic metals and abundance of heavy nutrient metals are associated with oxidative stress due to the way the metals oxidise and act the same as free radicals. Toxic/heavy metals can have a toxic effect impacting on cells, having metal toxicity problems in relation to oxidative stress is known as metal-induced oxidative stress. The excess metals affect the way in which our antioxidant defence system works, they also cause the biochemical destruction of important antioxidant vitamins such as vitamin C and E and disrupt glutathione levels and other antioxidants.

​There are tests available for oxidative stress which involve a urine and blood sample. The blood test measures antioxidant reserves and enzyme functioning which are involved in free radical eradication. A urine test measures the oxidative free radical damage that has occurred. A hair mineral analysis test is also recommended, this test can read toxic metal levels and also copper readings. For oxidative stress testing please click here for the available tests page.
Oxidative stress treatment
Treatment for oxidative stress involves dietary changes, lifestyle changes, supplement use and limiting and eliminating exposure to free radicals. If you undergo testing for oxidative stress and you test positive, then you will receive the treatment programme attached in the results email. If you have any questions about the results, then mindovermetal will answer them for you.
CORONAVIRUS - Unfortunately Biolab have had to close temporarily as they are based in the centre of London. They are now based in a temporary location outside of London but a lot of their tests have been suspended until further notice. It is still possible to order all of the tests from the other labs and some of Biolab's tests are still available. Test kits can still be delivered and test samples can still be posted back to the laboratories. There may be delivery delays outside of the UK. Any tests that are currently unavailable will display 'sold out'.
mindovermetal Ltd. UKPLC, 3rd Floor, 207 Regent Street, London, W1B 3HH. Company number - 09220400.