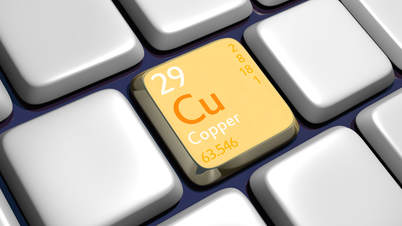 ​Copper is an essential mineral which is required in small amounts from the diet on a daily basis, it is therefore known as a trace mineral. Copper is also a heavy nutrient metal and has a higher atomic weight, so it becomes toxic for the brain and body when there is too much in the system unlike other lighter metals such as the electrolytes. The body has complex homeostatic mechanisms which allow the body to have a constant supply of available copper. The majority of copper is bound onto in the blood and carried around the body by ceruloplasmin, the remaining copper is bound onto and carried by other proteins.
What is copper toxicity?
​Copper toxicity is when there is too much excess copper in the body for various reasons.
Copper toxicity is a gradual process in which copper accumulates primarily in the liver and then moves to other organs of the body including body tissue and the brain. Copper is the most common heavy nutrient metal to be in excess and become problematic, copper toxicity is also just as common as toxic metal toxicity or even more so.
How and why does copper toxicity happen?
​​One of the main reasons why copper toxicity happens is due to a combination of chronic stress and adrenal insufficiency (for more information on adrenal fatigue please click here), this seems to be the most common problem amongst many individuals with copper overload. Chronic stress can eventually cause adrenal fatigue and the adrenal glands work with the liver collectively to produce copper-binding proteins - ceruloplasmin and metallothionein. If the adrenals are burned-out then they cannot work with the liver efficiently to produce enough copper-binding proteins, the result of this is unbound circulating copper which builds and builds.

​Below is a list of external sources of copper which are associated with exposure and which issues can contribute to or associate with copper build-up:

​There are foods which contain higher levels of copper, but this does not mean that they are unhealthy or poisonous in larger amounts. Foods which are high in copper are good for your health with a few exceptions which are considered unhealthy foods such as chocolate. Foods that are high in copper are perfectly fine for an individual who has normalised copper and zinc levels and balanced ratios, however, for a person who is copper toxic, high copper foods contribute to the condition and can potentially cause mental and physical reactions post-consumption of such foods.
​
Copper-toxic individuals will crave high copper foods because when copper is in excess it becomes bio-unavailable, meaning that the body cannot utilise the excess copper properly and an individual will, therefore, crave a mineral in need. This creates a vicious cycle of putting more excess copper into the system.
Below is a list of high copper food and drink sources:

Hidden copper toxicity is when the copper level in a hair mineral test actually appears below the ideal range but there are certain mineral/mineral ratio readings and markers which indicate that that the copper is hidden in body storage areas. This usually happens if the copper excess problem has gone on for a longer period of time and usually a calcium shell occurs.

​When copper accumulates in the body calcium levels rise in the soft tissues, the calcium is taken from the bones and used as a defence mechanism against chronic stress and the toxic levels of copper. Other mineral imbalances such as potassium and sodium (from adrenal fatigue) also cause calcium levels to rise. This process is called the calcium brake which eventually causes what is known as the calcium shell due to so much calcium being retained. The calcium is needed to numb the effects of the copper, slow down metabolism and calm the body. The effects of the calcium shell are a feeling of numb emotions, apathy, over sensitivity, defensiveness, social withdrawal and other symptoms. As the calcium shell builds a person’s awareness and perceptions diminish (brain fog), they will also experience symptoms from the excessive copper levels.
Copper toxicity treatment
Excess copper can be eliminated from the body through urine, stools or sweat (sauna therapy).
Eliminating excess copper can be done through dietary changes, supplement use, lifestyle changes and gentle detox regimes using supplements or other methods. If you test positive for copper toxicity then you will receive the appropriate treatment programme. If you have any questions about your results, then mindovermetal will answer them for you.
mindovermetal Ltd, Level 3, 207 Regent Street, London, W1B 3HH.
​Company number: 09220400
VAT registration number: 371185302